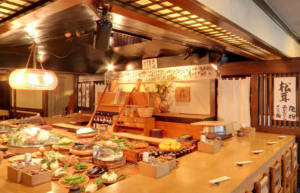 I will introduce what kind of restaurant it is.

It refers to a form of izakaya, a Japanese countryside style restaurant where the staff serves grilled (over charcoal) seafood and vegetables.

It is said to have originated in Sendai City, Miyagi Prefecture after World War II.

Robatayaki Inakaya is the best robatayaki restaurants in the world.

It’s an old restaurant opened in Roppongi in 1970 as a Japanese traditional robatayaki restaurant.

It is located in a convenient location from Roppongi Station.

They have two stores in Roppongi, one in the east and the other in the west, and the store President Trump visited this time is the east store.

They also open a store in New York.

On the website, it is the most popular robatayaki restaurant in the world.

It is established in 1970 and loved for more than 40 years by government officials and celebrities of various countries, including the U.S. president.

And there are three important points of the store.

There are delicious things, beautiful sake, and people gather there.

They are not bound by the constraints of the world, they do not deviate, they do not have contact with others as they are, and they face each other without being separated.

The fresh ingredients that are in season now are made into a superb dish that makes the most of the ingredients by facing the Irori fireplace in front of customers.

Please enjoy the exquisite taste with the selected brand sake.

It is also good to see craftsmen who do brisk work.

You can either have a friendly conversation or love the way they are served.

Please feel the spirit of the people of Edo who devote themselves to their hospitality.

It is also famous as a restaurant that established “Robatayaki style” where high-grade materials are baked in front of you.

The performance that serves dishes on a large rice paddle in response to the energetic chanting is loved not only by foreign tourists, but also by government officials and celebrities around the world.

A large percentage of the customers are foreigners, so they are highly evaluated by foreign tourists.

It seems to be spreading through word of mouth among foreign celebrities.

The foreign celebrities who have visited our shop so far are:

Some celebrities come to Japan secretly just to visit this store.

It is common knowledge of luxury stores that the price is not indicated because the menu is the current price, but there are some items that can be grasped as a single item price.

*Nuta: A dish of minced fish and vegetables dressed with vinegared miso (Sumiso).

Snacks to go with sake

・The stylish service and the loud voice of the staff matched the atmosphere of the restaurant.

The price is not cheap, but all of them are delicious.

・This robatayaki is cooked by the chef who sits on his belly, putting the best ingredients in front of him.

・The large shrimp and assorted sashimi were delicious.

The oysters and various vegetables were grilled and it was very delicious.

・Basically, I think the material used is upper rank.

・I was impressed by the taste.

Ingredients lined up inside the counter entertain the eyes.

・You can enjoy robatayaki in a lively atmosphere with seasonal vegetables, seafood, and meat.A famous restaurant with 70% foreign customers that day. Delicious!

・In the first place, the shop has no price. Fair value. The production, atmosphere, and service are good, but the price is great.

・The entertainment and taste are real, but if the general public likes it, it will be a shocking price.

・It’s delicious, but it’s also famous for its high price.

Robatayaki is no longer a common dish, but a very high-class dish.

・I had fresh seafood and vegetables.The service was perfect and I had a pleasant time.

There is Yojiya, a famous Japanese cosmetics shop in Kyoto, and its cafe in the Haneda Airport Passenger Terminal 1. ...

Tokyo Ramen Street is a commercial facility located on the Yaesu side of Tokyo Station in Chiyoda Ward, Tokyo.  It is...

Ochanomizu Station is a station through which JR Chuo Line and Sobu Line pass. The area around the station includes u...

Haneda Airport consists of the Domestic Terminal 1 and 2 and the International Terminal 3. It is spacious enough to trav...

There are patisserie kihachi in each of Haneda Airport Passenger Terminal 1 and Terminal 2 where you can casually enjoy ...

There are various restaurants in Haneda Airport. They also sell boxed lunches and takeout meals, which are perfect fo...

Do you want to go sightseeing with wearing Kimono? Tourists who want to wear kimono and enjoy Japanese atmosphere are...

What is tofu? Tofu (Tofu) is a processed food made by solidifying soybean juice (Soy milk) with a coagulant (Niga...